"My intestines have become my livers and my lungs are a bag of spaghetti with a borrito inside. And inside the borrito is a baguet. And if you tear open that baguet you'll find an empty space. And that empty space contains all the f^cks that I give about your pet iguana you Bojack Horseman looking piece of sh!t" - That kid in the fortnite server we were just in (XD) 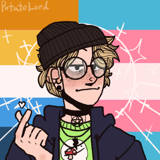 "My intestines have become my livers and my lungs are a bag of spaghetti with a borrito inside. And inside the borrito is a baguet. And if you tear open that baguet you'll find an empty space. And that empty space contains all the f^cks that I give about your pet iguana you Bojack Horseman looking piece of sh!t" - That kid in the fortnite server we were just in (XD)

I have mild red-blue colorblindness, ADHD, Autism, and Dyslexia(more with speech, spelling, and reading than with writing)

Neurodivergent minor so no nasty crap you hear?

Please don't say crap like "Oh (insert religious diety) loves you" or stuff like that. Joking about Cancer/other serious topics like that without asking if it's okay.

Racists, Transphobes, Homophobes, Xenophobes, Ace/Arophobes, EndoSysPhobes, Peds, if you think spanking is "dicipline"/spankers. Abvsers, Dream-antis(you don't have to like or support the creators or their content but don't go targeting people if they do)/any antis that hate ANY fandom just cus they don't like it/don't have a reason to hate but do it to ruin someones day:/, *TOXIC* Dream stans, Abelists, NSFW, MysOgynists, any hard to read typing quirks, Zoos, Disability/Service Dog fakers, TOXIC pro-lifers (as in someone who thinks women shouldn't be allowed to their bodys rights/ say it's murder)(sue me) Religion forcers, People who say they have "alter egos" are NOT okay; it's making fun of DID, OSDD, etc, only to find out it was just BPD or something the whole time and they pretend that they're plural when they know they're not, don't say you have an alter ego unless it's DID or a plural disorder, TERFS, Conservatives/Capitalists(you can interact but don't talk about that crap with us or we will block you faster than thought possible, trans Woman/Man ≠ real woman/Man supporters(it just gives people dysphoria saying that like-), Mattwalsh supporters, Far Rights, Truscums,

Systems, Neurodivergent friends, Agres, Furrys, Xenogenders, LGBTQIA2+ PLEASE I LOVE YA'LL INTERACTTT, Dream SMP fans, Therians, ppl with negativley stereotypes disorders; Bipolar, Narcicistic Personality Disorder, ASD(yes ppl think that we on the spectrum are "weird") and anyone who just gets targeted for disabilities/syndromes/disorders, Beginner Kandi-kids(I love talkin w/ ya'll sm- /gen), SD Teams, Tucutes, people who know pronouns dont equal gender, Endogenics, anyone that is just being themselves, WITHOUT hurting/harming others, you are wellcome to interact :)

FANDOMS: Voltron, DSMP, MCU, DC/I'm a simp for anything w/Robin, Undertale, ROT/TMNT, TOH, Haikyuu, former Warrior Cats obsessee, My Pride, so-so on MHA, Fairy Tail, Edens Zero, Monkie Kid, Ninjago, Gravity Falls, Steven Uni, Adventure Time, Jujutsu Kaisen sorta, so-so w/ Harry Potter cus the Authors a crap person, Minecraft, PJO/ DON'OT SPOIL FOR THE SECOND SERIES I HAVEN'T READ IT YET, Castle Swimmer, Helluva Boss, Hazbin Hotel, Camp Camp, Sk8 the Infinity, Blue Exorcist fans PLEASE TALK TO MEHH, Kuroko No Basket fans I am searchin the GLOBE for ya'll I stg, Saiki K, Hunter x Hunter, Seven Deadly Sins (KINDA I'M NOT RLLY INTO IT ANYMORE THO), Demon Slayer, Shaman King, Kipo AOTWB kindaaaa??? Idk anymore don't remember/didn't hyperfixate on it so idrc, GURREN LAGGAN FANS WHERE ARE YOU AND DO YOU EXIST, Blue Period, Orbital Children fans just not even in this world tbh... hehe, but if you are you get my ref :3, TPN, Ouran High Host Club, kinda Death Note but I stopped watching and forgot abt it on LITERALLY the last episode and now I don't remember it and I'm too lazy to go back and rewatch it so -_-, BNA, The Hollow (YA'LL THAT SHII WAS MY CHILDHOOD, Skylanders fans we still be waitin for the next season, Dragon Prince (DO NOT SPOIL THE NEW SEASON I WILL SMITE YOU), Young Justice(NAUR BUT WHAT DID THEY DO WITH LIKE- EVERYTHING AFTER SEASON TWO THO LIKE-) Danny Phantom, Wakfu, Tales Of Arcadia, Rise Of The Guardians, Henry Danger, Thundermans, Avatar

TLDR FOR MY FANDOMS:Just ask me if I've seen smthn and the answers PROBABLY gonna be yes ->-