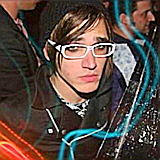 Hellooooo my name is gage :) im a MINOR so don't be a creep my dude, im pan and genderfluid and OH MY GOD THE GENDER ENVY RAY TORO GIVES ME IS UNREAL-

*Bands: MCR, FOB, Paramore, PTV, BVB, P!ATD (i don't support brendon before yall start barking at me but dang their first two albums were MASTERPIECES), AFI, The Used, and a lot more that im forgetting

DNI IF: you are ableist, homophobic, transphobic, racist, support problematic people, and just if you're a mean person in general