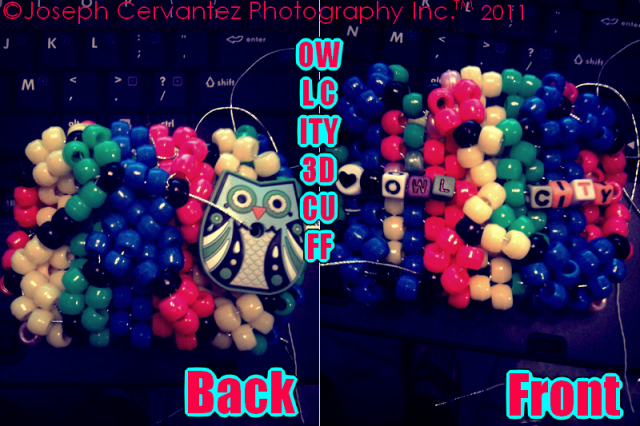 I can't tell you how much I liked that cuff you made! Too bad it's apart... I was listening to Owl City when I found your cuff, and I wasn't even searching for it!

Ha.. I took this apart to transfer the owl to another 3D, so this 3D no longer exists. Only the base does.

OHNO~I would never pretend to be a raver if I'm not. I just love the concept of kandi. It's good everyone got to share their thoughts. Everyone is entitled to their opinion. ^_^ Lmao, well back to the picture~

yeah. claiming to be a raver when you're not... that's lame. and it's not like a raver is something they should aspire to be, lol.

Oh wow I totally didn't expect any responses to that post :X
One thing about it that may bothering me might just be the fact that i know some people who have no intention to ever rave but make/trade/wear kandi and claim to be in the scene when they really aren't.

I completely understand where Monarch's coming from, because I used to feel the exact same way. It used to really annoy me when non ravers would call it kandi!

But over time I've stopped caring... partly because I do think there's a difference between bracelets and kandi, and also because many of the non-raver kandi kids I've talked to seem to be more PLUR than some ravers! As well as being a token of friendship amongst people at raves, to me kandi also represents PLUR (I like pretending PLUR exists) and you can be PLUR without stepping foot in a rave.

Also... normally, people who trade/wear kandi but don't rave do so because they're too young to rave or can't rave for some other reason. I think it's best for them to enjoy kandi now and join the scene later, rather than start raving when they're too young, or when they could get in trouble.

Just my thoughts... I don't mean to take sides because I've held both beliefs, but the being okay with kandi one requires more explanation.... And Monarch is completely right about how non-raving kandi wearers get picked on, so even though some people may be okay with it, be careful!

Monarch: Yes, that is an Owl keytopper. ^.^ I got it from Hot Topic.
I didn't mean to offend rave tradition, I just like the words kandi & kandies. That's not my excuse though, I just think that if I'm not able to rave yet, it's kind of unfair if I can't call them kandi? I don't know, if I just want to be apart of trading/making kandi, then I don't think I should have to rave.
P.S. YOU WIN AT GUESSING! ^.^